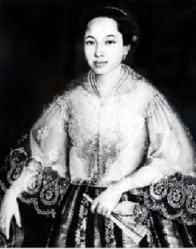 Dolores Paterno, born on March 10, 1854, was an esteemed composer during the Spanish era. She was best known as the composer of Sampaguita (La Flor de Manila) which she composed when she was just 25 years old. The song with its romantic melody became a very popular tune and made her a famous woman composer during the time. A Tagalog arrangement of the song was also included in the repertoire of the Harvard Glee Club, a distinguished choral group when they toured the Philippines in 1961.

Dolores was a sister of Dr. Pedro Paterno, the father of the Pact of Biak-na-Bato and writer of the first Filipino novel, Ninay. She is one of the 13 children of Maximo Molo Agustin Paterno. Her mother, Carmen de Vera Ignacio of Manila wrote the poem La Flor de Manila upon which the song Sampaguita was based.

Born to a wealthy family, Dolores was sent to an exclusive women’s school managed by the religious sisters, the Santa Isabel College. She dedicated much of her time to the study and mastery of music, particularly in piano and composition with Diego Perez as teacher. She was only 27 when she passed away on July 3, 1881.