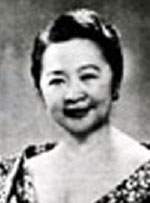 Lucrecia Roces Kasilag was born on August 31, in San Fernando, La Union. Music was introduced to her at an early age by her mother, Asuncion Roces, a music teacher. She learned to play the bandurria and guitar at an early age. Every weekend, she and all five of her siblings performed as the “Kasilag Rondalla” before their mother.

Even with her academic achievements, she never turned her back on music. Aside from taking piano lessons under Concha Cuervo and Pura Lacson-Villanueva, the young Lucrecia also took a diploma course in music teaching at St. Scholastica’s College. Shortly thereafter she enrolled for bachelor’s degree in music at PWU, and pursued graduate studies in music at the Eastman School of Music, University of Rochester in New York.

She taught at St. Scholastica’s College, Assumption College, the University of the Philippines Conservatory of Music, and PWU, where she became dean of the College of Music and Fine Arts from 1953 to 1977. She was president of the Cultural Center of the Philippines during the Marcos years and special consultant during the Aquino administration. She also held key positions in both national and international music organizations, including the League of Filipino Composers, National Music Council of the Philippines, Regional Music Commission of Southeast Asia, Philippine Society for Music Education, Asian Composers League, and the National Music Competition for Young Artists Foundation. She also reaped international recognition as musical director of the Bayanihan Dance Company.

As educator, composer, and performer, Kasilag was known for incorporating indigenous Filipino music with Western influences, thus paving the way for more experimentation among Filipino musicians. She also did pioneering research on Filipino ethnic dances and culture. In 1989, she was the lone addition to the roster of National Artists. She was conferred honorary doctorate degrees by the Centro Escolar University, PWU, and New York’s St. John’s University. Fondly called “Tita King,” Kasilag died on August 16, 2008.