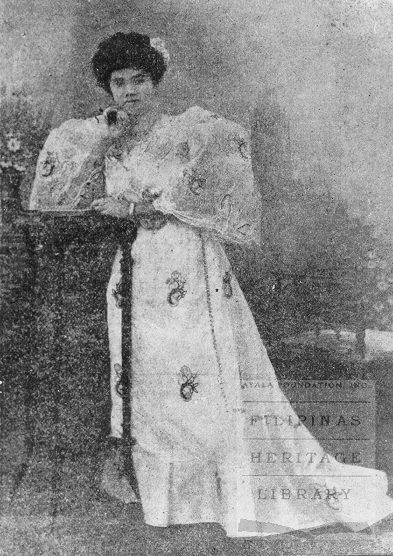 Soprano and sarswela star Maria Carpena was born on October 22, 1886, in Santa Rosa, Laguna. She was one of the eight children of Camilo Carpena, a rice grower and leaseholder of friar lands, and Maria Evangelista of Biñan, Laguna.

Carpena started singing in the church choir of Santa Rosa as tiple (soprano). She was sent to study in the Colegio de Santa Rosa in Manila and received her musical education under renowned composer Fulgencio Tolentino. Her voice and personality often attracted attention whenever she performed as a choir soloist in school activities.

At the age of 15, she debuted in a benefit concert at the Zorrilla Theater in 1901. This performance led her to love the theatre that she later appeared in a Tagalog sarswela under the direction of Cirilo Samonte. “This theatrical engagement was against the wishes of her father who disowned her” (Manuel 1955).

For a time, she continued her schooling “thru charity, helping the mothers in their works in embroidery and singing” (Manuel 1955). However, she eventually stopped going to school and later married Jose Alcantara. In 1904, when she was 18, she was widowed two kids, Florita and Jaime Alcantara.

Nonetheless, she continued to sing in the church choir as well as perform onstage. She was later discovered by Tagalog dramatist and sarswela producer, Severino Reyes when he heard her sing at Biñan Church. He teamed her up with Victorino Carrion in the sarswela Walang Sugat and the tandem became very popular. Carpena also appeared with other actors in the plays Minda Mora, Lakas ng Dugo, and La Confianza Mata al Hombre.

Carpena’s beauty, charming personality, and captivating voice made her one of the most acclaimed performers of her time. As Professor H. Otley Beyer described her: “She was a real nightingale. She would sing at the Luneta to 20,000 people and her voice would be heard clear through Manila Hotel.”
She died in 1915 in Manila.