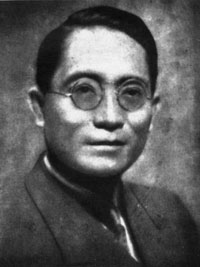 Composer, pianist, and teacher Nicanor Santa Ana Abelardo was born in San Miguel de Mayumo, Bulacan, on February 7, 1893. He was the son of a photographer, Valentin Abelardo, and a church singer, Placida Santa Ana.

At age five the young Abelardo learned solfeggio and how to play the bandurria from his father. A year later, he was already able to play the William Tell Overture on the guitar. At age eight, he already composed a waltz, “Ang Unang Buko,” which he dedicated to his grandmother. He later learned to play the piano while working for his uncle, painter Juan Abelardo, in Manila, where he studied in primary schools.

The prodigiously talented Abelardo started teaching music in schools in San Ildefonso and San Miguel, Bulacan, when he was barely 15 years old. Before he enrolled at the University of the Philippines Conservatory of Music, he worked as a pianist in pubs and theaters in Manila.

At U.P. Abelardo won first prize for “U.P. Beloved” in a competition for the university hymn. He eventually became a full-fledged instructor and obtained his teacher’s certificate in science and composition in 1921. In 1924, he became the head of the Conservatory’s composition department. He pursued further studies at the Chicago Musical College.

When he returned to the Philippines, he continued teaching at U.P. He also taught music to students in a boarding house run by his family.

Abelardo was credited for bringing the kundiman to the level of art. He also composed music for the sarswela as well as songs in different musical forms. He completed more than 140 compositions, including Nasaan Ka Irog?, Kundiman ng Luha, Mutya ng Pasig, and Bituing Marikit.

He died on March 21, 1934, at the age of 41. He left behind his wife, Sixta Naguiat, and their six children. He also left a number of unfinished works, including a symphony, an opera, and a concerto. The main theater of the Cultural Center of the Philippines, and the U.P. College of Music were named after him.