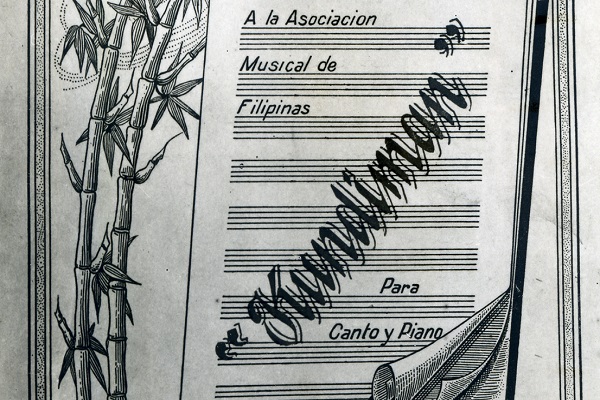 Awit
An ancient type of song that has a triple meter and a rhythmic pattern that accents the second beat. Its melody is traditionally chanted, using a scale that is native to Filipino folk culture

Ballad
“A narrative song usually performed by a solo singer who gives account of an event that happens in a community.” (From the CCP Encyclopedia of Art, vol. 6, p. 80)

Cantata
Vocal genre for solo singers, chorus and instrumentalists based on a lyric or dramatic poetic narrative. It generally consists of several movements including recitatives, arias and ensemble numbers.

Chamber music
Ensemble music for up to about ten players, with one player to a part.

Downbeat
The first beat of a measure. It normally receives the accent or the strongest accent since it marks the beginning of the measure

Form
The scheme of organization that determines the basic structure of a composition, comparable to an architect’s ground plan.

Genre
General term describing the standard category and overall character of a work.

Key
Defines the relationship of tones with a common center or tonic. Also a lever on a keyboard or woodwind instrument.

Kundiman
A song of devotion to country, beloved, child, the Virgin Mary, or a lofty cause. It is always in triple meter with a moderately slow to slow tempo

Kundiman – Art Song
“a form of Western solo vocal literature in which the voice part, the instrumental accompaniment, and the verse are interwoven to achieve an artistic musical whole” (From the CCP Encyclopedia of Art, vol. 6, p. 78)

March
“music with simple, strongly marked rhythm (4/4) and regular phrases, designed to accompany marching groups or some dances” (From the CCPEncyclopedia of Art, vol. 6, p. 100)

Measure (or Bar)
A single grouping of beats

Opera
Music drama that is generally sung throughout, combining the resources of vocal and instrumental music with poetry and drama, acting and pantomime, scenery and costumes.

Oratorio
Large-scale dramatic genre originating in the Baroque, based on a text of religious or serious character, performed by solo voices, chorus and orchestra; similar to opera but without scenery, costumes or action.

Polka
The song of merriment in folk and popular Filipino cultures. It is in moderately fast to fast duple meter. Most of Filipino Christmas carols use this musical form.

Pulses
Regularly spaced pulsation-durations which are relatively faster, smaller than beats and harder to count or follow

Rhythm
That property having to do with temporal patterns and sensations in music. Its three attributes are meter, tempo and rhythmic (kinetic) pattern

Strophic
Song structure in which the same music is repeated with every stanza (strophe) of the poem.

Tonic
The first note of a scale (the tonic or keynote do), which serves as the home base around which the other pitches revolve and to which they ultimately gravitate.

Upbeat
The last beat in a measure, normally unaccented or unstressed

Waltz / Balse
“a dance in triple time which became the most popular ballroom dance of the 19th century” (From the CCP Encyclopedia of Art, vol. 6, p. 80)