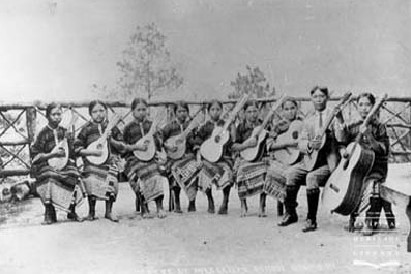 Despite colonial rule of more than 400 years, the Philippines continues to take pride in its indigenous music. Not only has indigenous music been preserved, but it has also helped enrich contemporary Philippine music, fusing the old with the new, the original with the borrowed, the indigenous with the foreign.

What we now regard as popular or folk music is a product of such fusion. One example is the pasyon, a verse narrative on the life of Jesus Christ. While the pasyon was originally based on material used by Spanish friars to convert the natives to Christianity, it was also transformed by Filipinos into something that reflected its own identity, dreams, and traditions. Other Filipino musical forms also emerged as a result of the intersection of indigenous and Spanish musical traditions. These include the talindaw (a boat song), the awit (a song in slow triple time), the tagulaylay (a mournful song), the sambotani (a song sung at a feast), the kumintang (a war song that later became a love song), among others, all of which flourished during the Spanish colonial period.

The American period saw the heightened experimentation of Filipino composers with European styles. However, the period also produced nationalistic Filipino composers who used their formal training and expertise in music by incorporating ethnic elements in their works. One of these composers is Francisco Santiago, regarded as the “father of nationalism in music,” who transformed the kundiman from folk song to art song, a song that “requires advanced vocal technique and musical maturity for its performance, usually on the concert stage” (CCP Encyclopedia of art vol. 6, 1994, p. 78). Examples of these are Pakiusap, Madaling Araw and Sakali Man. Another is Nicanor Abelardo who utilized the kumintang in his classic kundiman, Mutya ng Pasig.

In the 1930s to 1940s, Antonino Buenaventura also used nationalist themes in his compositions like Pandanggo sa Ilaw and Mindanao Sketches which was based on Manobo themes. Other composers who made use of indigenous themes were Juan Hernandez in Mga Katutubong Tanawin and Lucio San Pedro in the Malakas at Maganda Overture.

The number of artists who sought to merge Filipino musical traditions and forms of Western classical music grew in the 1950s to the 1980s. Among the notable composers who emerged from this period were Lucrecia Kasilag, Jose Maceda, Ramon Santos, Francisco Feliciano, Eliseo Pajaro, Ruben Federizon, and Conrado del Rosario.

In popular music, Joey Ayala has infused pop and rock with a genuine appreciation of ethnic music as well as a strong sense of nationalism.