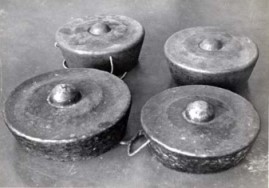 Indigenous Philippine folklore is characterized by sacred rituals and practices, and made more fervent and vibrant by the music that accompanies them.

In Mindanao, the sounds of the agum and guimbao signal the assembly of the participants in the performance of sacrifices by indigenous groups. The miminsad, a dance song, is also chanted as they walk before the altar.

The wedding feast is another occasion where music plays a key role. Some Muslim groups play music using small and large kettledrums as accompaniment to dancing, one of the highlights of the celebration.

In Jolo, the sua-sua is a celebrated courtship song and dance that has often been modernized for troupe performances.

A war dance in Bukidnon called the sagayan epitomizes the gallantry of Muslim combatants while little girls perform a festival dance wherein they wear hollow copper anklets and ring little cells to produce certain sounds “to the accompaniment of a variety of tom-tom and an indigenous xylophone.” (Bañas 1975).

In Agusan, the tud-ob, a song composed of four notes, is sung during rice harvests. In Sulu, four gongs are used to produce a kind of music called the tagungo.

Mindanao folk music includes the ancient Muslim folk song and dance called estijaro, and a Mindanao folk song called uruyan. These are usually accompanied by drums, gongs, or other percussion instruments like the subing, a gong.