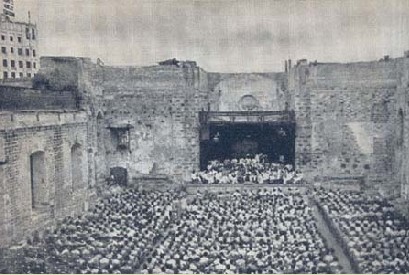 15 Jan Music in the Philippines after Liberation

“God Bless the Philippines.” This was what Filipinos were singing to the tune of Irving Berlin’s “God Bless America” during the landing of General Douglas MacArthur in Leyte in 1944.

Inspired by the new freedom and promise of recovery brought by the end of the war, the Philippines saw the rebirth of its music scene. In 1945, the Manila Symphony Orchestra was reorganized by Dr. Herbert Zipper. Filipino musicians performed for American soldiers at the post-liberation army camps, as well as for American friends and visitors. Some of the musicians also toured the provinces and held special shows in hospital wards.

Among the leading musicians of the time were violinist Ramon Tapales, opera and radio stars Lourdes Corrales de Ramon de Razon and Serafin Garcia, and pianists Carolina Monserrat and Julio Esteban Anguita. In 1946, operatic performances also resumed, with the National Opera Company offering a production of Verdi’s La Traviata, under the baton of Prof. Hilarion Rubio. A festival of folk songs and dances was also presented at the University of Santo Tomas in the same year.

Once again, music became an important part of the everyday life of Filipinos after the war.