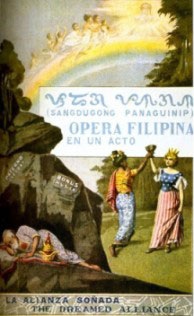 The mid-19th century marked the advent of foreign opera presentations in the theaters of Manila. The opera not only served as a novel form of entertainment for Filipinos, but also as an avenue for the honing and development of Filipino musical skills, through their exposure and occasional participation as musicians in these opera productions. Thus by the early 20th century, the Philippines was able to produce its first opera.

Sangdugong Panaguinip is the first Philippine opera in the Tagalog language. It was composed by Ladislao Bonus who is dubbed as the “Father of Philippine Opera.” The one-act opera with five scenes was based on the Spanish libretto La Alianza Soñada by Pedro Paterno which was translated into Tagalog by novelist and dramatist, Roman G. Reyes. One of the melodies of the opera was Sampaguita (La Flor de Manila), a popular melody of the period, which was composed by Paterno’s sister, Dolores. The libretto was also translated into English as The Dream Alliance by Col. Walter H. Loving, founder of the Philippine Constabulary Band.

First performed at the famed Teatro Zorilla on August 2, 1902, the opera was staged by the renowned Molina-Benito Company. Overwhelmingly successful, it was performed successively for more than a week with Governor William H. Taft often in attendance. However, published materials often mention that there were only five performances of the opera (Rivera 2008).

This opera tells of the invasion of Luzon and the exploitation of its people by the Moros or Muslims, and how the Tagalogs fought to restore peace in their land, with the aid of their newfound allies, the Americans. Raymundo C. Bañas, a historical writer and music critic, summarized the plot as follows:

A band of Muslims invades Luzon and imposes taxes or tribute on every maiden in the towns of Pasig, Cainta and Antipolo, Rizal. Led by Lapu, the inhabitants of these towns were unified by way of a blood compact so as to repel the invaders. One night while pondering his plan to conquer the Muslims, Lapu fell asleep in a cave known as the cave of Dona Geronima. He dreamt of having seen a rainbow with rays leading to paradise and illuminated by a constellation of American stars. Lapu saw an American-Pilipino alliance, which under Bathala’s guidance could lead to prosperity and happiness of his people… (Bañas 1969)

Written after the installation of the American Civil Government, this opera symbolizes acceptance of American rule in the country. It “was probably intended to be a propaganda, based on the libretto, the score (the super-imposition of two anthems) and the circumstances of its performance in 1902” (Rivera 2008). Nonetheless, it is a milestone in Philippine music history. It paved the way for the composition and production of more Tagalog operas like Magdapio by Alejo Carluen and Gayuma by Gavino Carluen.

Despite the lack of formal training and relying solely on apprenticeship, Bonus was able to develop an expertise in the opera. Inspired by local folklore, he was able to assimilate and indigenize the European opera, transforming this into a distinctively Filipino opera.