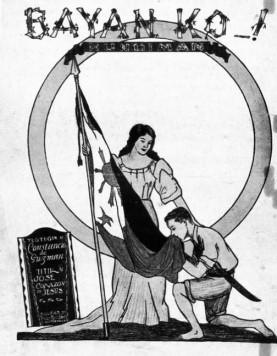 Music played an interesting role in the recent inauguration of President Benigno Aquino III and Vice President Jejomar Binay last June 30, 2010. Like the President’s inaugural speech, the songs performed at the occasion expressed sentiments of hope and love for the country with the unfolding of a new chapter in Philippine history.

In addition, the classic protest anthem “Bayan Ko,” which became very popular during the People Power Revolution of 1986 and the historic rise to power of former President Corazon Aquino, was performed by the Madrigal Singers. The song was composed in 1928 by Constancio de Guzman (with lyrics by Jose Corazon de Jesus), during the time when Filipinos were fighting for independence from the United States.

The song expresses a nationalist sentiment which eventually became a battle cry against colonialism and oppression at different periods in Philippine history which includes the Japanese occupation in the 1940s and later in the 1970s to 80s in the rallies and protest marches against the Marcos administration. Unlike many of the popular kundimans that tell of love for someone, this is a kundiman about love for the nation, and is the only kundiman sung with clenched fists.

Because of the song’s timeless message and power to evoke patriotic fervor, Bayan Ko continues to remain relevant today. Hopefully, an atmosphere of optimism and patriotism will be sustained as the new administration begins, especially when the message of patriotic songs such as these are put to heart.