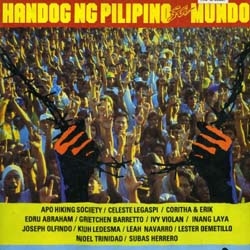 It’s been a year since the Filipino nation relived the People Power spirit of 1986 through music during the funeral of former President Corazon Aquino. Fondly called ‘Tita Cory,’ her name is forever etched in Philippine history as the first woman president of the country, People Power heroine, and icon of democracy.

Tita Cory is best remembered by the songs “Magkaisa” and “Handog ng Pilipino sa Mundo,” among others—patriotic songs that became anthems during the 1986 People Power revolution that put an end to two decades of dictatorship. “Magkaisa” was composed by Tito Sotto in two days and presented as an oath-taking gift to President Aquino. It was recorded by Virna Lisa and was frequently heard on radio stations during Aquino’s first 100 days in government. As the lyrics suggest, the song evoked a sense of unity.

On the other hand, “Handog ng Pilipino sa Mundo” was composed by Jim Paredes of the acclaimed musical group APO Hiking Society. It was recorded by 15 singers and released in April 1986. It earned APO international recognition and the song’s lyrics are embedded on the wall of the Our Lady of EDSA Shrine. The song speaks of the bloodless revolution of 1986-an offering of the Filipino people to the world.