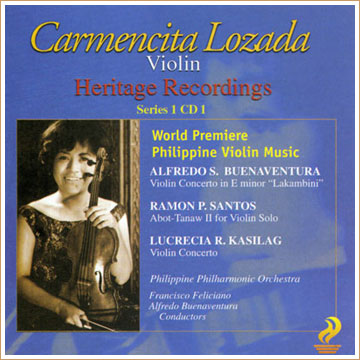 15 Mar The Making of a Great Filipino Violinist

What does it take for a classical musician or singer to make it in Europe?

While the conductor Oscar Yatco was teaching in Hannover and the soprano Evelyn Mandac was making her debut at the Metropolitan Opera, the violinist Carmencita Lozada was taking Europe by storm.

After her double victory at the Paganini Competition in Genoa, Lozada was harvesting acclaim in Germany, Holland, Austria, Great Britain, Belgium Greece and Poland, among others.

In West Germany, Lozada was described by German critics as the violinist with “volcanic temperament and fascinating with exotic sparkle.” Still others saw “the devil-of-a-violinist in her blood.”

In Holland, a critic noted: “Lozada played with nearly superhuman virtuosity, passionate yet controlled musical temperament, and a remarkably right feeling for rhythm.”
Lozada admitted that her earlier stint at the Vienna Academy made her absorb different musical periods and styles and exposed her to musical buoyancy.

The Europe of her time was the same place where music was everywhere. Recalled Lozada: “Europe is where you feel a lot of musical energy. Both young talents and seasoned artists have the chance to join festivals and competitions.”

One of the highlights of her European sojourn was being chosen as a last-minute substitute for a famous violinist to play a Sibelius concerto in Frankfurt.

In France, she discovered that her recital was graced by a famous violinist in the person of Henryk Szeryng, who was very enthusiastic when he greeted her backstage.

To Lozada, being an artist at any time is never easy, but “if your talent for that is great, it becomes a compulsion and probably a responsibility.”

To Lozada, who passed away a couple of years ago, being an artist meant having spiritual insight and individualistic nuances within the confines of the style. She said: “Once the mastery of the piece is achieved, the artist surrenders to the dictates of the music as in a trance. There is no substitute for total immersion in the music.”

Carmencita Lozada is the first and only Filipino prizewinner of the Paganini International Violin Competition in Italy. CDs of Carmencita Lozada are available for research at the Filipinas Heritage Library.

* A longer version of this story appeared in the May 5, 2008 issue of the Philippine Daily Inquirer. Reprinted with the permission of the author.