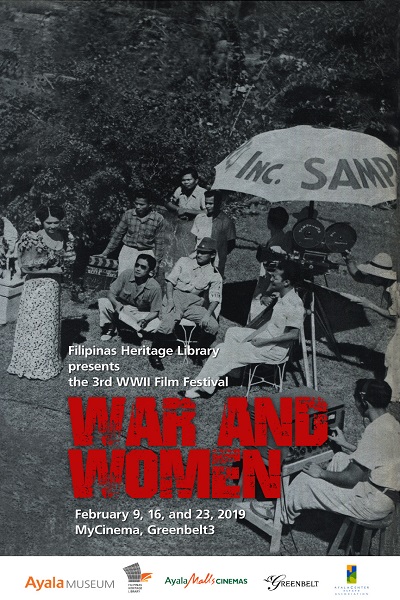 Featuring documentaries on the Battle for Manila and the economic consequences of World War II; romantic movies about the Philippines and Japan; and biopics about women warriors in our country’s continuing history.

2:00 PM: DAYS OF THE CRIMSON SUN (1995, Liliane Manahan) – A retelling of the Battle for Manila in February 1945, featuring interviews with survivors. Perhaps the only Filipino full-length documentary on World War II directed by a Filipina.

4:00 PM: THE WAR WE WERE NOT TAUGHT ABOUT (1994, Jin Takaiwa) – An important documentary about the destructive effects of World War II and postwar industrialization on the Philippine economy and the lives of common folk.

4:00 PM: SA TOKYO IKINASAL (1948, Manuel Silos) – A comedy about two brothers and war heroes vying for the love of one woman.

4:00 PM: NANAY MAMENG (2012, Adjani Arumpac) – A documentary about a woman who grew up in the war, experienced extreme poverty and domestic violence, and rose above it all to become a beloved leader of the masses.

Ticket per day:
Php 300 Regular
Php 200 Seniors, Students, Members
Free admission for guests born in 1945 or earlier
LIMITED SEATS ONLY.
Tickets may be purchased in advance at Ayala Museum. Subject to availability, remaining tickets will be sold at the door of Greenbelt 3 MyCinema during the screening dates.

*Held in conjunction with the WOMEN AND WAR Exhibition at the Ayala Museum which will run from February 2 to March 3, 2019.

The Filipinas Heritage Library houses the Roderick Hall Collection on World War II in the Philippines, which focuses on personal experiences, both civilian and military, within the Philippines during the Japanese occupation and the Second World War. Includes special collections such as the BGen. Francisco H. Licuanan, Jr. Collection of the Philippine Veterans Affairs Office (PVAO), including digital records of Filipino soldiers and guerillas; the Manuel L. Quezon Family Collection; Gen. Fidel V. Segundoâ€™s wartime diaries; guerrilla war papers from the Silliman University and Central Philippine University; and a linkage to the University of Santo Tomas Internment Camp letters and documents. Also includes Japanese and Chinese publications on the subject.